The paranja is a traditional outer garment worn by women belonging to the Muslim communities of Uzbeks and Tajiks, living in multi-ethnic cities in Central Asia.

The paranja has the form of a voluminous cloak, worn over the head in such a way as to cover the entire female figure. This outfit is distinguished by a specific cut with characteristic long sleeves, tapered and sewn behind, flowing down the person’s back and serving only a decorative purpose. This design probably originated in ancient Persia – costumes of figures presented in reliefs in Persepolis (6th century BC) have similar “apparent sleeves”.

The complement to the outfit covering the woman’s body, complying with the principles of Islam, was a veil for the face – chachvan, in the form of a rectangular, stiff sheet, densely woven using black horsehair. The chachvan and paranja, which tightly cover the face, became one of the determinants of the identity and cultural distinctiveness of the Uzbeks during the Russian expansion in the second half of the nineteenth century until the outbreak of the October Revolution, when traditional clothing and veiling of the face due to religious principles were prohibited.

The presented paranja with a chachvan certainly belonged to a wealthy female owner, as evidenced by the valuable fabric from which it was sewn and its numerous decorations. The top of the outfit is made of dark purple velvet, the fibers of which have been trimmed at an angle in such a way that the light refracting on their surface creates a checkerboard pattern. The pattern of the embroidery running along the edges is based on the motifs of stylized sheep horns, derived from the nomadic tradition of Central Asia. The lining is also a luxurious element – it is sewn from a fabric with blurred geometric patterns, obtained by dyeing using a complex technique called ikat. 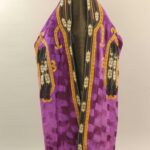 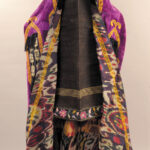 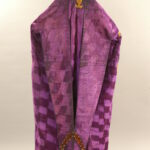 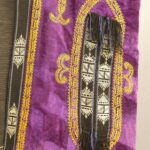 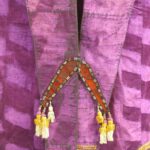