In July we pay particular attention to a personal portable reliquary with a small statue inside.

The reliquary is a rectangular box with the rounded top surface and a sliding front panel. It is made of copper sheet, only the front panel is of brass sheet. At the top of the reliquary is a small, circular ear for a chain, to hang for example on the neck. A single sign of decorative Newari script (from Nepal) called Lantsa or Ranjana is engraved on the front panel. It is the syllable “om”, derived from Sanskrit, to which many meanings are attributed, and is mainly believed to be a means of manifestation of Indian gods and Buddhas. That is why “om” is in many mantras – Buddhist, short, repeated prayers to various deities. A mantra is considered to be the sound image of a deity. It is always in Sanskrit, although may be aritten in different scripts (Devanagari, Lantsa, Tibetan). The remaining surfaces of the reliquary are smooth – undecorated.

Inside the reliquary is a Buddhist statuette of the popular protective deity Green Tara. It is made of gilt bronze (in painting, the goddess would be shown with a green complexion). The statue is made in the technique of casting, with precision visible in the refinement of details, despite the small scale. The character sits on a throne in the shape of a lotus flower – Hindu and Buddhist deities are often shown this way, because the lotus symbolizes divinity, among others. The lotus is simplified here: it resembles a low barrel, on the sides of which wide flower petals are carved. This simplification results from the fact real lotuses do not grow in the countries of Tibetan Buddhism. Green Tara is seated in a pose called lalitasana, with her left leg bent at the knee and placed horizontally on the throne, and her right leg lowered from the throne – this pose signifies her willingness to help. She raises her left hand to the torso level, and the thumb and forefinger are brought together – this is an Indian gesture of argument, meaning teaching. In turn, she lowers his right hand with the inside towards people and this is a gesture of generosity. At the left arm is a closed lotus flower called utpala, which would be shown as blue in a color picture. Such a lotus is a symbol of the protection by a deity at night and an attribute of, among others just Green Tara. The figure wears a sumptuous attire and jewelry of a Bodhisattva-rank deity: earrings, a necklace, bracelets on the forearms, a diadem on her head.

A bottom of the lotus throne has been preserved. Inside Buddhist statues are small rolls of paper with prayers, as well as powdered incense or grain, and this is put inside by a monk (lama) during the consecration ceremony. The removal of the statue’s content would be a sacrilege to a Buddhist.
Taras are female deities in Tibetan Buddhism, which is also practiced in Mongolia and is the third, youngest, form of Buddhism. Interestingly, in the earlier varieties of this religion, Tara is not present. The name means “Deliverer”, and their popularity results from being considered as prottective. Originally, since the 6th century C.E. only one Tara was mentioned in religious Buddhist literaturę. The first differentiation into Tara Green and White took place in the 8th century, and later there was a belief in three other forms, albeit less frequent.

In Tibetan Buddhism, personal reliquaries are called “gau”. This one is made of metal, but there are also items of rock crystal and other stones, wood, clay, and occasionally ivory. They also come in various shapes: cuboidal or closed with an arch at the top, round or even star-like. Inside there are rolls of paper with prayers, as well as relics, e.g. a scrap of a holy monk’s robe or images of deities (miniatures painted, clay plaquettes, metal statuettes). Followers of Tibetan/Mongolian Buddhism commonly wear the reliquiary around their necks, around a belt, or on a leather belt slung over their shoulder. 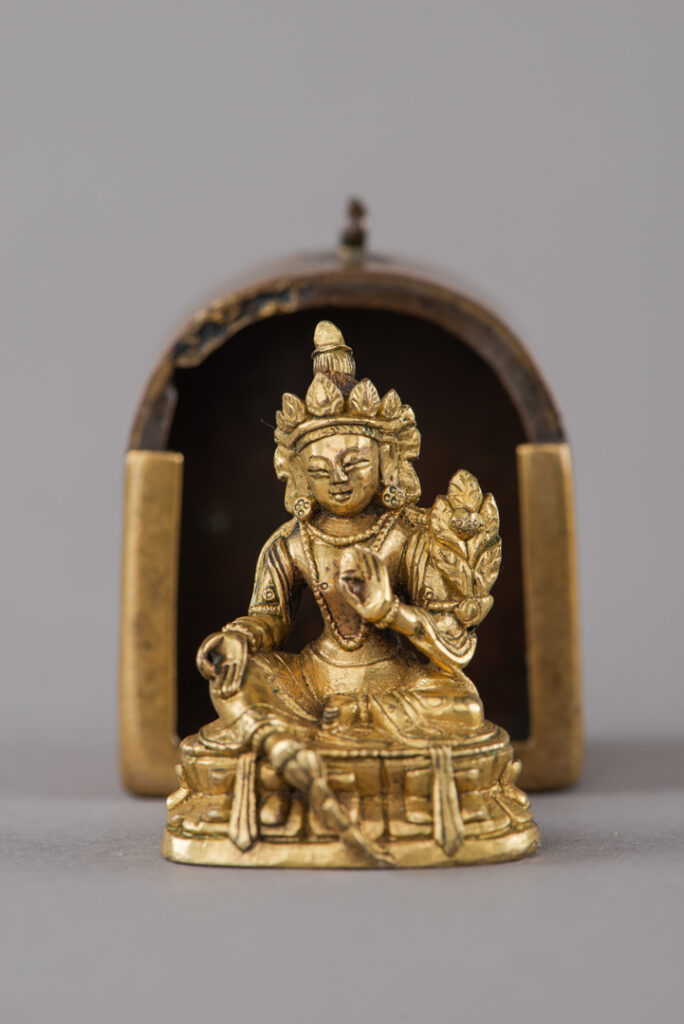 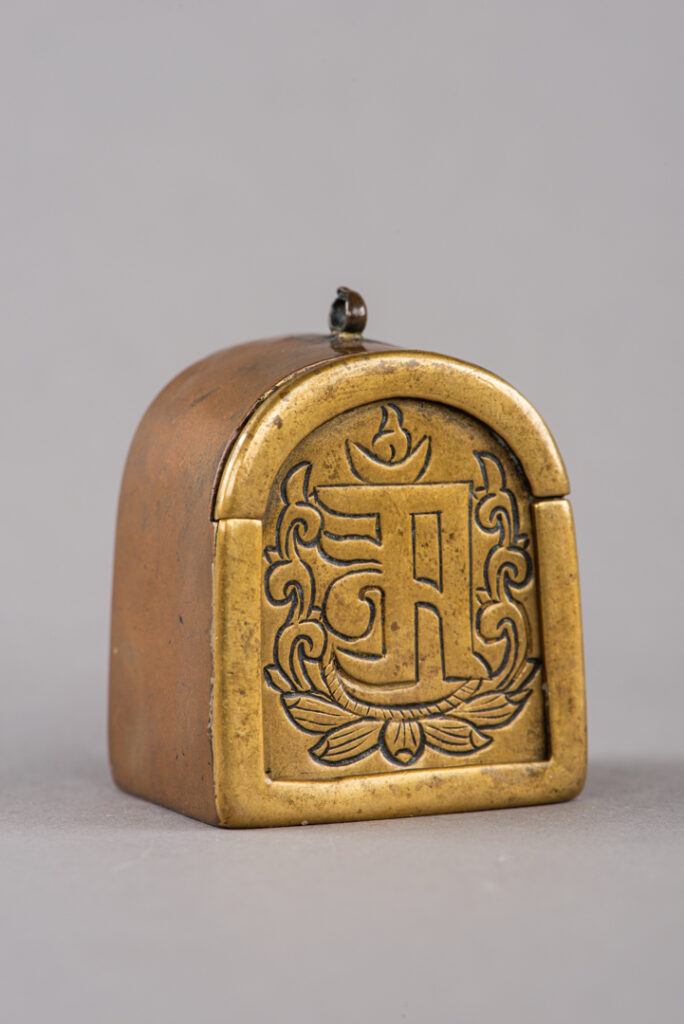 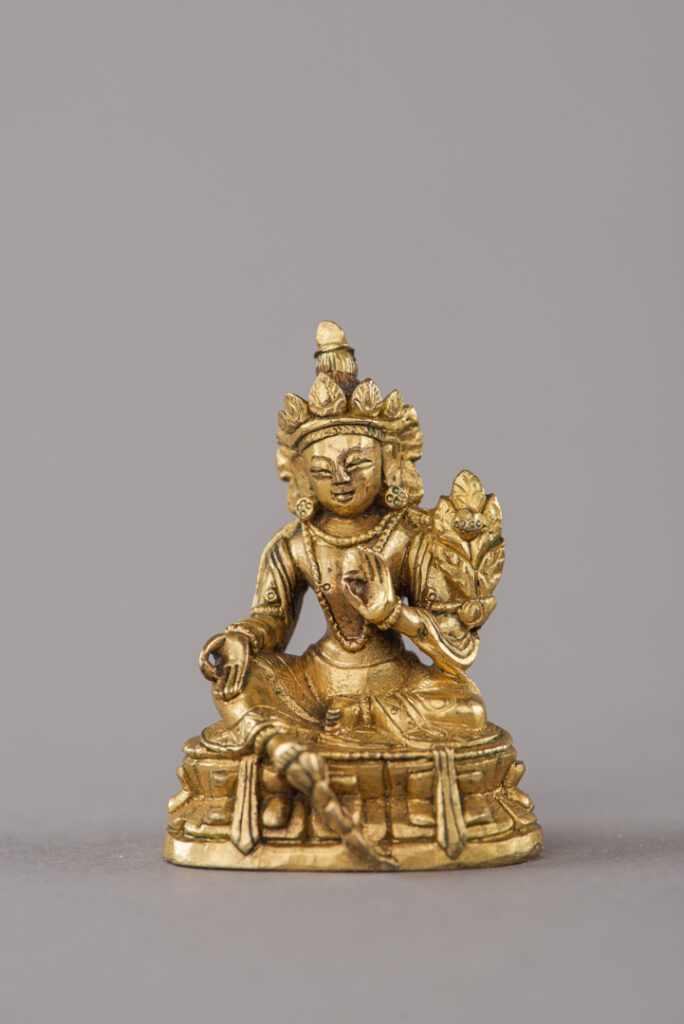 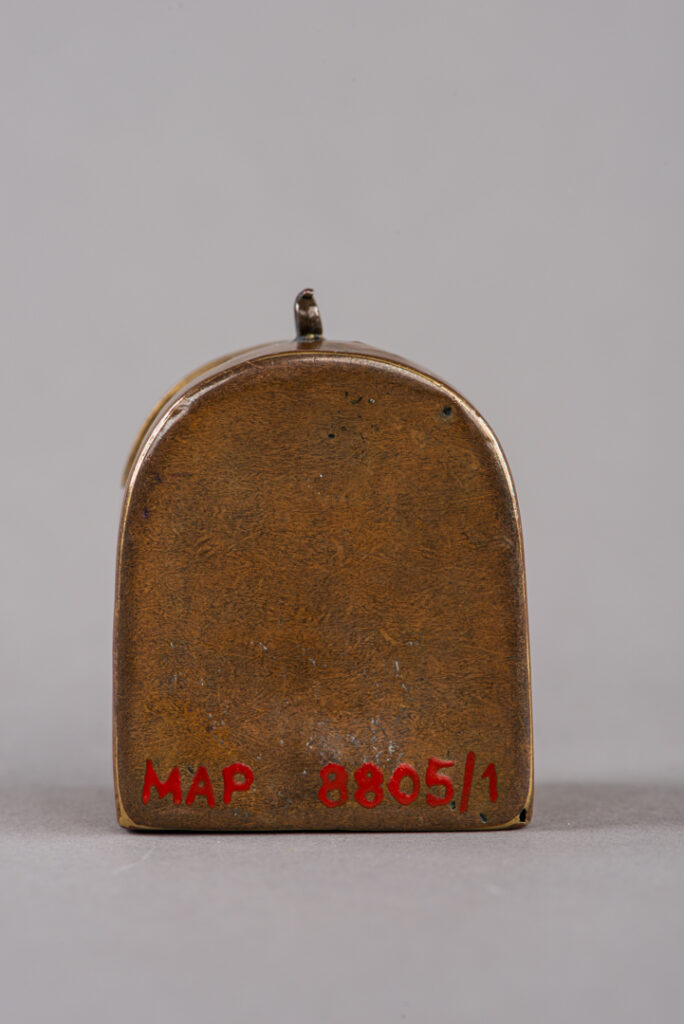 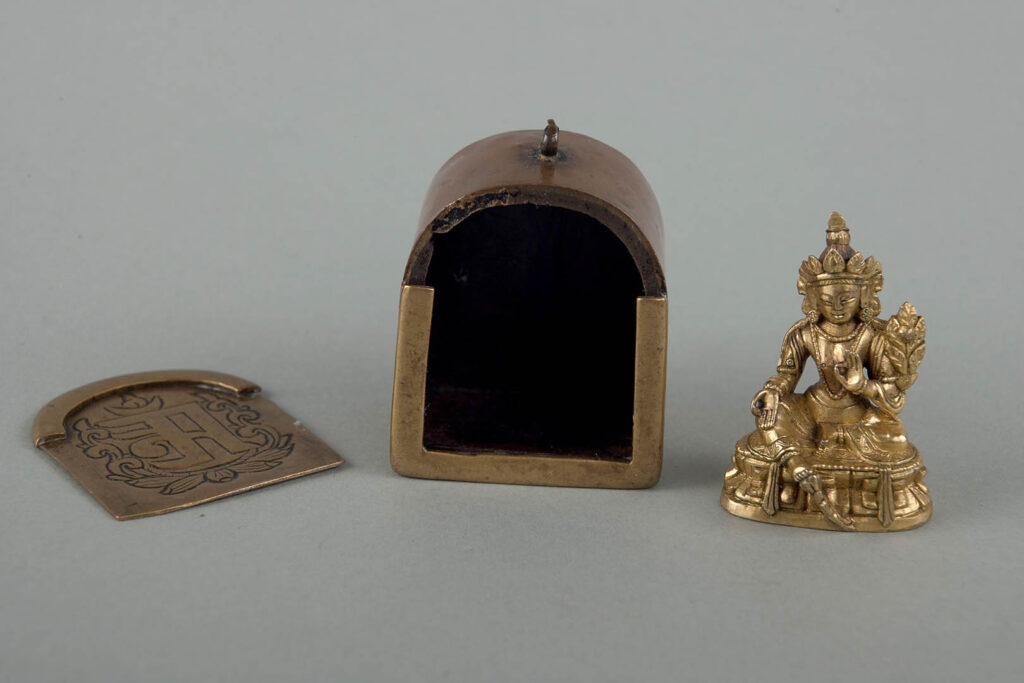 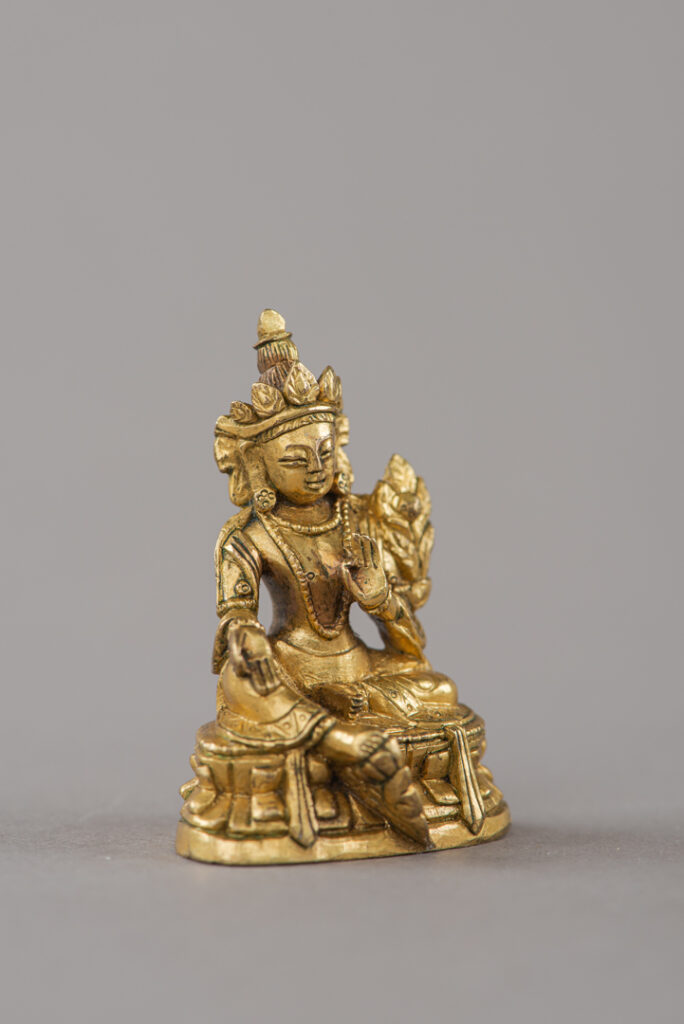 Photos by: Łukasz Brodowicz / The Asia and Pacific Museum