In the month of May we pay particular attention to a Wayang kulit theater puppet.

A shadow theater puppet depicting a monkey. The puppet is made of dried buffalo leather, with many small openwork cut out and polychrome; it has a thickness of about 1 mm and is quite rigid. It is mounted in a wooden stick to animate, that is sharpened at the bottom. When during the performance the puppets are not in use at the moment, they are stuck into a banana tree stump placed horizontally at the bottom of the screen. The puppet has both hands movable, consisting – each – of two sections, with sticks attached to the wrists to animate. The character is dark red in color. The head is shown in profile, however, with visible both eyes. The eyes are round in shape. The mouth is open, with large fangs. The short neck does not protrude from the shoulders, and this is one of the features of the shadow puppets from Bali, Indonesia. The shoulders are shown in a 3/4 turn (one of them is longer), the torso is in straight view, and the legs are in profile. This kind of variability of view is typical of shadow puppets from Bali and the neighboring Java. A long tail reaches above the head and is curled at the end. The figure is dressed in a dark red and green skirt and wears rich jewellery: a diadem, a necklace, a chain across the torso, bracelets on the forearms, wrists, ankles and tail, and rings on the fingers and an ornament at the end of the tail – all jewels are golden in color.

The depicted character is Sugriva – the monkey king from the Indian epic Ramayana, an ally of his positive heroes, two brothers: Rama and Lakshmana, fighting to free Sita, the wife of Rama, from the hands of the demon Ravana.

Shadow puppet theater has been present in Javanese sources for at least a thousand years, and the neighboring island of Bali was influenced by Javanese culture as early as when Java was dominated by the Indian religions of Hinduism and Buddhism (that is, in the period extending till the end of the 15th century). Currently, Bali is an enclave of Hinduism in Indonesia, and Java, like most of this country, is dominated by Islam. Nevertheless, in Java and Bali, the wayang kulit theater of puppets casting a shadow over the white screen during night performances (the puppets are lit from the opposite side, formerly by a single oil lamp) remains in full popularity. In addition, these performances act as a ritual for prosperity, derived from religions older than Islam in Indonesia.

The puppets are animated by one person – a dalang or a puppeteer, storyteller – speaking their lines and leading the orchestra consisting of metallophones and nowadays also the drum. 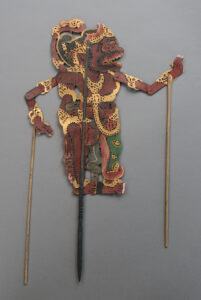 Photo by Łukasz Brodowicz / the Asia and Pacific Museum