In the first month of 2022 we pay particular attention to a mongolian pendant.

The pendant in the form of the so-called Chinese cloud with floral elements inside and a leaf below.

In Buddhism this type of puffy clouds symbolize good weather and the sky above us and for Buddhists they mean prosperity, favor of fate. But they are a Chinese motif in general, because the shape comes from the top of the ruyi scepter (pronounced ju-ee), originally a weapon, and today a symbol of fulfillment of wishes and an object considered as an amulet. The scepter has been  presented (and it is so till today) as a gift for men of higher social status, such as company bosses. The scepter top has the shape of the mythical lingzhi mushroom – in China a symbol of longevity (it derives from a real mushroom considered to have healing properties. In Chinese Buddhism, the ruyi scepter has been an attribute of the bodhisattva of wisdom Manjushri (Chinese: Wenshu) since the 8th century AD. Let us add that Buddhism in China was adopted as early as the first century AD.

In Buddhist iconography (in former India, and now in Tibet and Mongolia) there is another similar symbol of prosperity – the so-called wish-granting gem (Skt. cintamani), actually a group of three spherical gems arranged in a triangle.

In this pendant, the cloud is made of white metal (an alloy with a silver content of up to 50 percent) and covered with brass, while the leaf underneath is silver, forged and engraved.

The pendant is a fragment of a larger whole, presumably a diadem of a Mongolian woman, over the forehead or temples, or else it could have been part of a necklace or an earring. Women’s jewelry in pre-revolutionary Mongolia was sumptuous and representative, consisting of diadems, earrings, temple pendants, necklaces, hair clips, etc. It was mainly made of silver with the addition of precious stones, while in Inner Mongolia in China – coral and other precious stones dominated over silver. 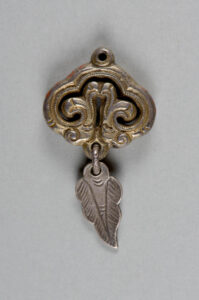 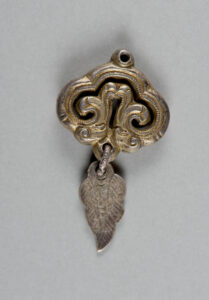