In the month of May we pay particular attention to a double-edged dagger – keris.

The keris is the national weapon of Indonesia, and Nusantara in general, as is called insular South-East Asia with the Malay Peninsula (the Javanese word Nusantara means: Archipelago). Keris come in various local varieties and sizes, with the largest being those from the Indonesian island of Bali, adjacent to Java to the east, as well as the keris sundang from the Philippines. The keris has been known since at least the 14th century. It no longer has a combat function, but is an element of ceremonial men’s attire and a symbol of status. The best kerisses are inherited from father to son. Some kerisses are richly decorated with patterns and made of costly materials.

Our keris is massive and almost the size of a small sword. It has a wavy blade, which narrows evenly down to the point, and in the upper part, near the hilt, it expands rapidly, but in an unusual way, because it is asymmetrical, i.e. more in one direction than in the other. This gives a shape similar to the asymmetrical letter T. The blade is double-edged, and this is a normal feature of keris. This particular blade has 9 curves or bays (luk), and the bays towards the point are getting shallower. Wavy kerisses are less frequent than straight ones and are more difficult to forge. On the surface near the hilt there are depressions separated by a narrow rib, and on one blade is a thickening clled gandik, as well as some small spikes characteristic of keris. The surface of the blade is dark, almost black, with a light, silvery pattern resembling small and densely arranged and curled rings on wood. This pattern is bright as it is made of an iron-nickel alloy. Both the alloy and the pattern are called pamor. In Indonesia, pamor can also be found on many other weapons, not only on keris daggers. The individual pamors have the prescribed shapes, including rings or lines, forms similar to a fern leaf, or to geometric figures, as well as symbols. They also have their names; here it is beras wutah (Javanese for: „scattered rice“).

The hilt in this keris is a small sculpture, entirely covered with silver sheet. It represents a human figure, it is Bayu – Hindu god of wind. Shown as quite stocky, holding a jewel in his hand. Bayu has curled hair, sideburns, a gentle expression on his face. He is dressed in a dhoti, which is a strip of fabric draped around the hips to resemble loose pants or a skirt that reaches the knees or the middle of the calves. He also wears a wide collar and a diadem. He is shown seated on a pedestal decorated with a row of triangles with additional plant forms inside. The lower part of the hilt is decorated with a series of oval nodules embossed in the silver sheet (it is an imitation of the cabochons of precious stones). All these details are accurately made, despite the relatively small scale of the hilt. They are embossed (repoussed), i.e. knocked out of the plate from the reverse side.
Between the hilt and the blade is a narrow ring (mendak) decorated with precious stones. The narrow and small mendak is typical of balinese kerisses; in other islands the rings are visibly larger.

The scabbard is similar to the letter T, as it has a long crosspiece – upper transverse part called wrangka – used to secure the assymetrical upper part oft he keris‘ blade. In this keris, the wrangka is oval, with a spiral at each end. The scabbard, just like the hilt, is fully covered with silver sheet, with patterns on it. These are small, dense plant forms: plant tendrils, flower rosettes, etc. All the patterns are made with high precision. 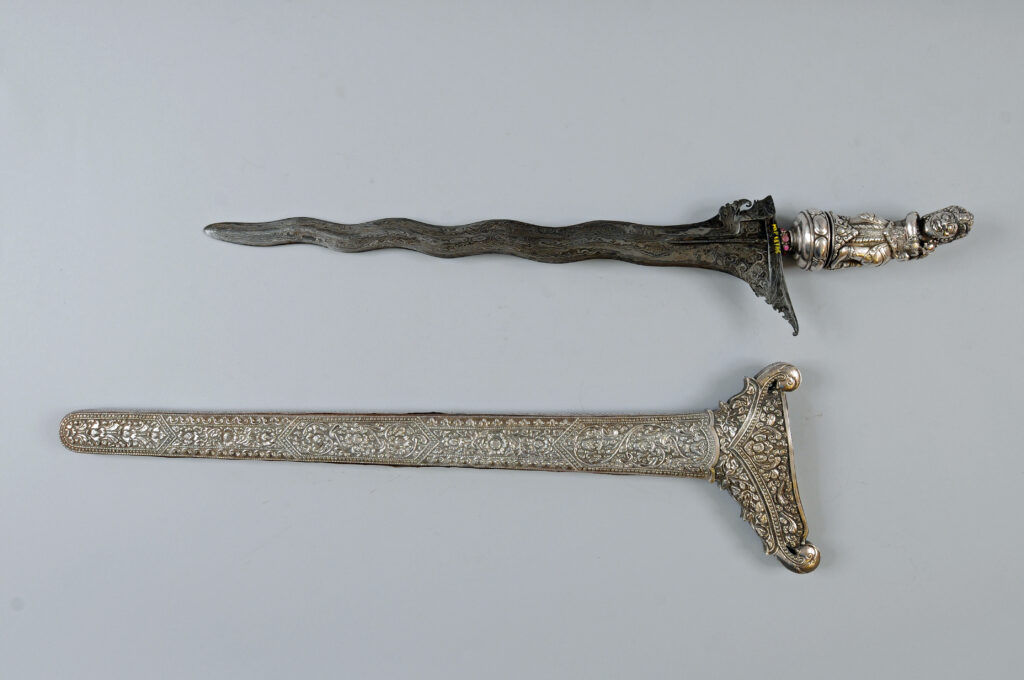