Every month curators of the Asia and Pacific Museum carefully select one object representing various parts of our new permanent exhibition Journeys to the east through the cultures of the Middle East, Central Asia, Mongolia and Indonesia, to which we will invite You as early as 2022.

In November we pay particular attention to a rolled up depiction of the lama Zanabazar (1635-1723), the first spiritual head of Buddhism in Mongolia.

The lama is sitting cross-legged on many color cushions and on a throne with a high back, under a canopy. He wears yellow and red, also orange and gold monk robes. He holds in his hands the symbolic monk’s scepter of spiritual power – the vajra and the bell – the ghanta, the two main ritual objects of a monk in Tibetan and Mongolian Buddhism. His head is uncovered, surrounded by a circular nimbus of aquamarine color. The face is fully circular, what is the ideal of beauty with the Mongolians. In front of the throne is a large bowl with offerings.

In the background is a simplified meadow and the sky with the sun and moon, which means the stopping of time: it appears in pictures showing deities of the Buddhist pantheon. The latter is very large in Tibet and Mongolia. It includes various categories of characters: Buddhas, Bodhisattvas, dharmapalas (wrathful defenders of the religion), yidams, minor deities, prominent worshipers such as arhats, mahasiddhas, important lamas (e.g the Tibetan Dalai Lamas and Panchen Lamas, as well as Buddhist leaders in Outer Mongolia – the third in the Gelug order hierarchy). Zanabazar was a person of many talents: a monk, a sculptor, casting on his own bronze altar statues, a physician, the inventor of two new types of writing (but they basically did not catch on), a reformer of the Buddhist liturgy. As the spiritual head of Mongolian Buddhism, he was called Öndör Gegeen, and his successors – Bogd Gegeens (the Tibetan version of the title of all these dignitaries is Jebtsundamba Khutugtu). Till the communist revolution in Mongolia in 1921, there were eight spiritual leaders of this rang, Zanabazar included.

He was born in a khan family and this was the main reason for his elevation to the highest clerical position, as a child already, but he proved to be an outstanding personality and the greatest artist in the history of Mongolia. His sculptures are renowned for technical excellence, being cast in two parts only the figure and the lotus throne.

Buddhist religious paintings such as this one show most often a single figure – this is the main theme of Tibetan/Mongolian Buddhist painting. Their material and technique is normally tempera on canvas and they can be rolled, e.g. for transport, hence their Tibetan name thangka – something that can be rolled up. They are placed in a decorative of fixed proportions, made of silk fabric, not preserved here. At the bottom edge was a round wooden stick on which the picture could be wound up. 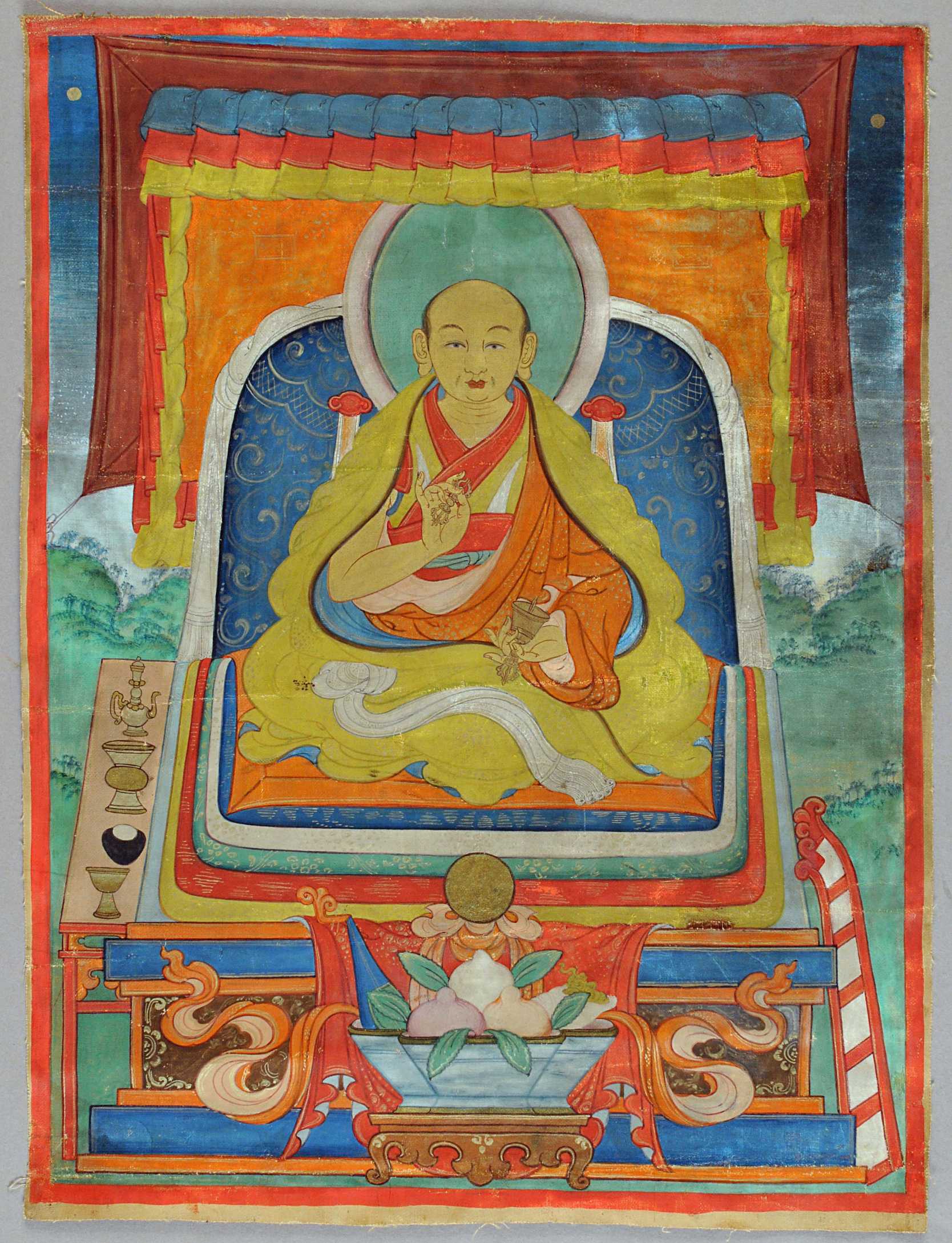