August 17 is Indonesia’s national holiday – Independence Day, the anniversary of the declaration of
independence by Sukarno and Hatta after colonial rule of the Netherlands and the Japanese occupation
during World War II.

Garuda is a character from Hindu mythology, depicted in the form of an eagle or half-eagle and half-
human (as here) and considered to be a mount of Vishnu, and also the ruler of the skies. The national
Indonesian airlines are named after him, and the bird in a stylized form is the country’s emblem, a
symbol of pride and strength.

The image of Garuda became a frequent theme in the crafts and art of Indonesia, which in the first
thousand CE was deeply influenced by Indian culture, Hinduism and Buddhism included. There
followed full or partial identification of some figures from the Hindu pantheon with those occurring in
the indigenous mythology of Indonesia. This was also the case of Garuda, which made him very
popular among Indonesians. His cult overlapped with the earlier, local cult of the hornbill bird
associated with the sun. The Garuda’s form had among others, oil lamps used in the past as the light
source in the traditional Javanese shadow theater wayang, and the motif of its wings (or tail and
wings) is common in the ornamentation of fabrics, including Javanese batik. The motifs associated
with Garuda are popular till today, despite the Islamic domination of Indonesia, including Java, since
the 15 th century. On the other hand, Bali, a small but populous island to the east of Java (separated only
by a not very wide strait), is to our days an enclave of Hinduism in Indonesia. Here, Garuda is often
depicted in a decorative sculpture adorning traditional architecture (placed at the base of a pillar sendi
supporting a Balis’s typical pointed roof), or constituting a work of art in its own right.
The presented work is a sculpture in full, whereas the wings, tail and some pieces of clothing are made
separately with use of mortise-and-tenon joint. The work is made with precision of details. The
combination of surfaces with different textures increases the decorative effect. The sculpture combines
traditional Balinese iconography (the figure of Garuda) and style (a reference to the wayang forms –
shadow theater puppets) with a European influence, visible through the realism of form and details as
well as decorative function. This type of sculptures has been created in Bali since the 1920s. 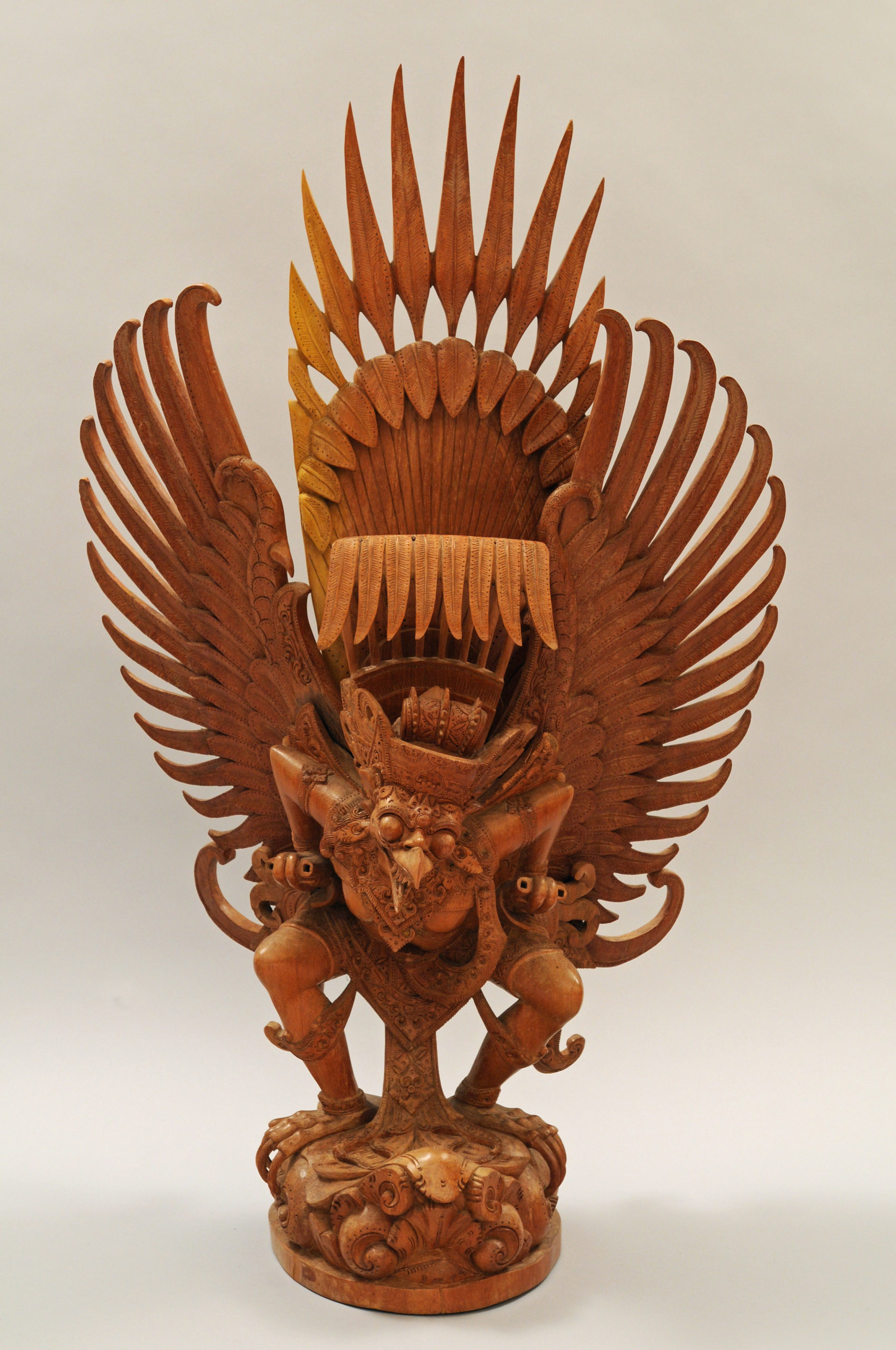